What Is Float And How To Calculate Total & Free Float?

HomeWhat Is Float And How To Calculate Total & Free Float?

What Is Float And How To Calculate Total & Free Float?

Project’s goals can become heavyweights if we don’t have the flexibility to execute intuitive changes. We need the freedom to make choices. Project Float and Free Float analysis are some of the sources to make choices in the project. We use term float to express flexibility. This flexibility can be at the project level or the activity level.

During my coaching sessions, I observe a lot of confusion about different types of floats that can exist in a schedule network diagram. Many Project Management Professional (PMP)® certification aspirants consider total float and free float the same. In this blog, I am drilling this down so that all the confusions go off. And for it, let’s first discuss a few points/definitions:

Here, I am not going into details of above and details of how to create a network diagram, ES, EF, and LS& LF for activities.
Now let’s get back to float. There are 2 types of floats which can exist i.e.

Let’s see what these floats are all about

Based on PMBOK® Guide Sixth Edition Total Float is

The amount of time –

that a schedule activity can be delayed or extended from its early start date without delaying the project ﬁnish date or violating a schedule constraint.

Now, the question is how is total float calculated?

The total float and slack are synonymous.

The total float is the difference between project completion date and the total duration of critical path activities.

In other words, you have a project to finish in 25 days. Your calculated critical path activities on the schedule network diagram will take 22 days. So you have a project float of +3 days. Here you can see, afloat can be a positive or negative number.

We will discuss negative float later in this post.

Find the second-longest sequence of activities in the network diagram. Subtract its total duration from the duration of the critical path sequence. The difference between the two duration will give you the float for each activity in the second sequence.

I see another confusion here – is Float the same as lag? The reason for this confusion lies in the concept of the ability to delay an activity. Lag is a delay in the successor activity. Total Float is the amount of time by which you can delay an activity from its early start date without delaying the project finish date.

Then what is the difference between lag and total float?

Both have a different purpose when we look at it from a realistic project management scenario:

Lag is used to put delay deliberately to meet some already available dependency or pre-requisite.  Like you cannot start work of putting wallpaper until the final coat of paint gets done and dried. In this case, you need to delay the wallpaper work by few days.

You can see it is like dependency or necessity.

In nutshell, lag is deliberate can’t be bypassed. Float is flexibility which can be planned and managed to optimize the best possible value for the project.

Now comes the real challenge, Free Float is different to Total Float and yes, it’s not a small difference which can confuse one with another.

The amount of time –

The obvious question is – How do you calculate free float and independent float?

If you use the formula, LS-ES or LF-EF will get activity two has eight days float. But here this float is converting into free float.. let’s see how…

You cannot delay activity two by eight days without slowing activity three’s early start of 17th.. so the float of activity two is =6 days.

For an activity, the total float can become free float if-

All activities do not have a free float. You need to see if there is a free-float available for an activity.

Let’s look at one more example to compile the stuff. Refer the below network diagram:

What does this diagram depict?

In summary, what is the difference between total float and free float?

Now come to the negative float:

A Many PMP® certification aspirant asks me – Can a critical path have negative float?  Can a float be negative?

If you need an discussion around these concepts with some practical project management scenarios, watch the following video right away. 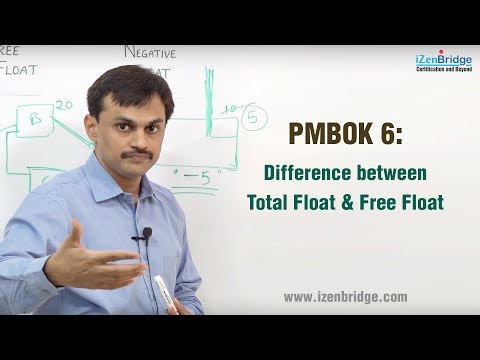 I hope now the basic difference between these floats is clear and Float mystery is not more floating for you . If you still face any doubts or confusions you may refer to two points- first the definition and second the above table. Happy reading and do post follow up questions here on our DISCUSSION FORUM

The PMI registered Education provider logo is a registered mark of the Project Management Institute, Inc.