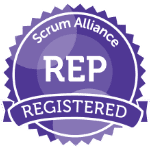 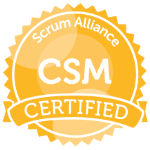 Why Should You Go for a CSM Certification in Bangalore?

Certified Scrum Master® is a globally acknowledged certification provided by the Scrum Alliance. Around 85% of IT enterprises have adopted Scrum for their complex projects. In fact, companies are using Scrum for marketing, business development and operations. It’s a modern framework that suits the ever-changing business environment; the inspection and adaptation, coupled with the quick feedback cycle, makes products delivered fast. Certified Scrum Master®️ has a very important role in a Scrum team. Certified Scrum Master®️ Certification Training Workshop in Bangalore is based on the Scrum framework approved by Scrum Alliance and will help you:

Why become a Certified Scrum Master®?

Of the world’s complex IT projects are done using Scrum Framework.

Of professionals reported an improvement in their quality of work-life with Scrum. (State of Scrum Report 2017-18)

What Will You Learn in This CSM® Bangalore Workshop?

Bangalore is India’s IT hub and also the capital city of Karnataka. The city is one of the fastest-growing startup ecosystems in Asia, with a new startup growing almost daily. Bangalore, Mysore, Hubli, and Mangalore are becoming the major cities and hubs of the economy. According to the current scenario, the demand for Certified Scrum Masters is also growing in these cities. To meet the growing demand, iZenBridge offers Certified Scrum Master certification course sessions in Bangalore. Our CSM® program in Bangalore will be led by one of the best CSTs in the world. The average salary of the Certified Scrum Master is $120K per annum. Companies are actively hiring Certified Scrum Master professionals in Bangalore, such as IBM, Capgemini, Accenture, Bosch, Honeywell, Deloitte, etc. “Bangalore has served as India’s technology capital for over three decades. With a robust heritage of premier R&D laboratories, academic institutions, and public sector-focused firms, the city has significantly contributed to India’s IT leadership in the world,” said Prashanth Prakash, Chairman of Startup Vision Group–Karnataka. Bengaluru has also earned numerous nicknames in recent years, including “City of Baked Beans,” “Garden City of India,” Silicon Valley of India,” and “Global Hub of Technology Start-ups”. Indeed, in the Bangalore ecosystem, companies such as Paytm, MobiKwik, Lendingkart Technologies and Policybazaar have also started gradually scaling up. Global multinationals such as Infosys, Wipro, Accenture, TCS, IBM, Oracle, Cognizant, Capgemini, Cisco, MindTree, HCL, Amazon, Dell, HP, Tech Mahindra, Samsung R & D, EY, Nokia, Deloitte, Intel, Huawei, Flipkart, Microsoft, KPMG, Hitachi, Siemens, Google, Philips, IBM, Adobe and so on, all have centres herein Bangalore. To make you grow faster in your career, our expert team of Agile coaches will also help you design a career path of your choice inside Agile and Scrum and guide you perfectly throughout the CSM® journey.

Process to Become a Certified Scrum Master® in Bangalore

Enroll in iZenBridge for CSM

Attend our CSM Training with CST 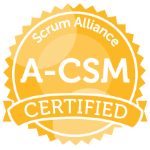 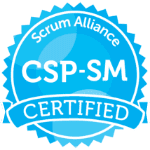 Why CSM® with iZenBridge?

55,000+ subscribers are getting the benefit

What are Scrum and Agile?

Agile is a time-boxed, iterative approach to software development. There are some frameworks inside Agile that enterprises are using for developing complex systems. The table below describes various Agile frameworks and their unique characteristics:

What is the difference between Agile and Scrum?

Agile is a methodology which broadly defines the principles of software development. It has multiple frameworks which list down the detailed process. Scrum is one of the many Agile methodologies discussed in the last question.

What is the difference between Waterfall and Agile?

What does a Certified Scrum Master® course professional do?

Certified Scrum Master®️ is a servant leader whose primary role is to ensure that the Scrum principles are followed while developing the software. He/she facilitates meetings and ceremonies and works closely with various stakeholders to remove impediments for smoother software development cycles. A Certified Scrum Master®️ also coordinates between various Team Members and Product Owners.

What is Certified Scrum Master® certification and training?

A Certified Scrum Master®️ is entrusted to lead a Scrum implementation inside their organisation. Their primary role is to ensure that the team follows the Scrum framework. They remove impediments and create a culture of trust, transparency, and self-organisation. Here is a list of certification bodies which offer certifications for Scrum Masters in Bangalore.

How is Scrum Alliance different from other certifying bodies?

Scrum Alliance stresses the need for in-person interaction to grow as a Scrum Master. The post-training mentoring and grooming are supported by the Scrum communities, which have a local presence in the form of Scrum user groups. Our Scrum user group is known as Discuss Agile Network, and we keep conducting many offline events and conferences in all major cities of India.

Continuous learning and always mentoring scores above once-in-lifetime opportunities to learn something. Scrum Alliance has outlined a clear path for future growth in Scrum with the help of the certification, knowledge sharing, and community support. This kind of network and community is rare in the IT domain.

Why Should I Go for a Certified Scrum Master® training in Bangalore?

This choice should come from your career needs; Scrum is the most followed Agile methodology globally. There are millions of people who have done some level of certification in a Scrum with different bodies. The Certified Scrum Master® Online Training has some of the following distinct benefits.

How long does it take to become a Certified Scrum Master® in Bangalore?

How much does it cost to become a Certified Scrum Master® in Bangalore?

The CSM® workshop cost varies according to the location. In Indian cities like Bangalore, Hyderabad, Delhi, Pune and Chennai, the cost is around INR 25000, excluding Tax. The above CSM certification cost in Bangalore includes everything. The price varies between providers and the time when you are enrolling.

How much does the Certified Scrum Master certification exam cost in Bangalore?

How much does a Certified Scrum Master® make?

Certified Scrum Master® salary varies between 10-15 lakh depending on the experience. The salary varies according to the profile, employer, experience, and negotiation skills. Two data points below show that the median salary is INR 10 lakh, while the upper side is up to 16-17 Lakhs in the experience range of 5-7 years.

Is the Scrum Master a Project Manager?

What is the role of the Scrum Master?

Scrum Master’s role includes but is not limited to the following:

What is the Professional Scrum Master?

It’s the name of the certification provided by the home of Scrum (Scrum.org). There are multiple levels of Professional Scrum Master certification: PSM I, PSM II PSM III.

How do I renew my Scrum master's certification in Bangalore?

What is the role of an Agile Coach?

The Agile Coach facilitates Scrum teams and the Scrum Master to adopt Scrum values and principles and guide them in fixing common change management issues. The role of an Agile Coach is to empower and groom the team members so they can adopt Scrum and become successful in Scrum implementation.

How do you become an Agile Coach?

An Agile Coach is an experienced Scrum professional with the skills of a coach. To become an Agile Coach, first, you should practice Agile and Scrum by playing different roles like Scrum Master, Scrum Product Owner, Scrum Developer, Team Member etc. Exposure to different roles in Scrum ensures that you understand the overall Scrum framework in practice. The second aspect of an Agile Coach is the actual coaching skills which come with the practice. The coach is not a trainer or a mentor with a quick fix to all problems; rather, he/she grooms the team and creates an environment where the team is empowered enough to take their own decision and implement it.

What is an Agile Certified Practitioner?

There is no exact certificate in this name provided by any certification body. However, professionals who are certified in Agile and Scrum and are using it in their life can use this as a title.

How do you become a Certified Scrum Master® in Bangalore?

What is the cost of a Certified Scrum Master® workshop in Bangalore?

The cost of a Certified Scrum Master® Bangalore session may vary according to the provider and the location. Some other factors are the quality of trainers and the competition. As of now, the price range for a CSM®️ training Bangalore session is between 23000-28000, excluding the service tax.

Where do you conduct your CSM® Certification in Bangalore?

All CSM® Training Workshops are conducted on an online platform accessible to people from various parts of Bangalore.

What other Agile training do you provide?

iZenBridge provides Agile courses to help you move up the Agile ladder. Scrum Alliance CSM training course in Bangalore is the starting point; we help you gain knowledge and certification on Scaled Agile Framework, CSPO®️, Enterprise Agile Coach, and Kanban Management professionals, among others.

Which companies are hiring CSM® certified professionals in India?

Bangalore is the IT capital of India. The major paymaster for the Scrum profile is SAP India, Infosys, Wipro, JPMorgan Chase, Sungard, Hewitt Packard, Cognizant, etc.

What are the job prospects after getting certified as a Scrum Master in Bangalore?

The CSM®️ course certification professionals are among the top 10 hot jobs per the recruitment statistics released by Linkedin. Scrum report suggests that the teams outside the IT domain, such as Marketing and Business Development, are adopting the Scrum framework thanks to its simplicity and minimalistic approach.

Can I do an online scrum certification in Bangalore?

Which all cities do you offer Scrum training?

We conduct Scrum Master training in Bangalore, Pune, Hyderabad, Chennai and Delhi NCR. A few sessions are also conducted in Kolkata and Mumbai.

Do you want to validate how much you understand Scrum?

If yes, here is your chance. Whether preparing for the next interview or taking on the Certified scrum master® certification exam, these free quizzes are what experts have prepared for you.

It helps you enhance your knowledge of Scrum, clear your misconceptions and doubts and also help you score better in a CSM®️ training and certification course exam. A Good score always boosts the confidence of the participant.

What is the Cancellation/Refund & reschedule policy for the CSM certification course in Bangalore? 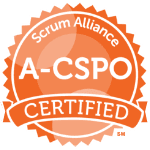 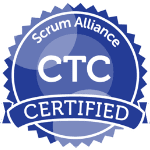 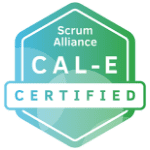 How To Reach Our Venue

Hotel Davanam Sarovar Portico Suites is located at Davanam Plaza in Koramangala. The distance between Hotel and Forum Mall is 2 km, whereas Hotel and Udupi Garden Bus Stop is 2.6 Km. The hotel is 6 km from the Lal Bagh botanical gardens and the bustling shopping district along Brigade Road.